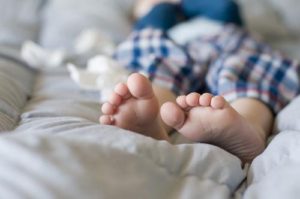 Joint hypermobility syndrome describes the excess flexibility of joints where they are able to exceed their normal range of motion, so are considered hypermobile. This is because of the increased laxity in the connective tissues throughout the body. Hypermobility is often seen in childhood, and may persist into adulthood. People with hypermobility often describe themselves as ‘double jointed’. It is often tested by checking the flexibility through various joints in the body using the Beighton Score.

In a majority of cases, joint hypermobility is hereditary and will have no impact on a person’s life, aside from acknowledging that they are more flexible than others.

In much rarer cases, joint hypermobility is a result of a connective tissue disorder such as Marfan’s Syndrome and Ehlers-Danlos Syndrome, as well as in Downs Syndrome.

Many people with joint hypermobility will never experience any painful symptoms from having very mobile joints. This being said, having loose ligaments and tissues may increase the risk of injuries such as ankle sprains that relies on the stability of the ankle joint through its ligaments and tissues. For those that experience symptoms, these may include:

Often, no treatment is indicated for joint hypermobility syndrome where it remains asymptomatic and has little effect on daily life. A percentage of children with joint hypermobility will also see an improvement in adulthood as their flexibility decreases.

Unfortunately for some, joint hypermobility does predispose them to developing other painful conditions such as posterior tibial tendon dysfunction secondary to having flat feet (pes planus). Treatment will then focus on managing the resulting condition, as opposed to the hypermobility itself. Another such condition is lateral ankle instability. Ways of managing hypermobility and its symptoms include:

Because hypermobility can impact people very differently, you should see a podiatrist if hypermobility is causing you pain or issues. They will develop a management plan that is specific to your symptoms and daily activities to give you the best outcome.