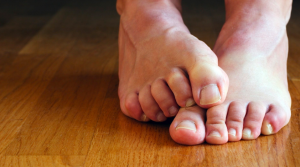 Hammertoes describe the slight toe deformity where the toe begins to point down in the middle of the toe. Unlike claw toes, the toe remains straight through the ball of the foot and then begins to bend downwards, resembling the shape of a hammer. Claw toes are differentiated by the toe first bending upwards from the ball of the foot, before curling around to point downwards.

Hammertoes are most likely to affect the second or third toes, though can affect any of the toes. Common causes or contributing factors can include:

The biggest symptom is the hammer-like position of the toe.  Many hammertoes can remain asymptomatic, particularly in men that don’t wear tight shoes or place any abnormal pressure on their toes. However, hammertoes can also become uncomfortable and for some, painful.

Pain usually results from corns, blisters or calluses that form at the end of the hammertoe where it comes in contact with the ground. This can make it painful to walk and will require the blisters, calluses or corns to be managed to alleviate pain. The toes may also become red and swollen from rubbing against the shoes. In the early stages, hammertoes may still be flexible and able to be straightened out with the fingers. However, over time, the toe will become fixed in this position.

Depending on your symptoms, pain levels and your goals for your toes, your Podiatrist will discuss the best options for you with regards to managing your hammertoes.

How are hammertoes treated?

The best treatment is prevention. Because footwear is the leading cause of hammertoes, avoiding pointed footwear and always ensuring that there is sufficient room at the toes is a great place to start. Minimising the wear of high heels will also help, as will ensuring the size of shoes is always measured in accordance with your longest toe, which can be your second toe instead of the big toe – a common mistake.

Your Podiatrist will help identify the exact cause and may provide advice on removing corns or reducing the callus, if present. Custom orthotics can help control the imbalance between the muscles and the tendons. To realign the toes, where appropriate, splints may be used. Surgery is only suggested for hammertoes when conservative options are exhausted.