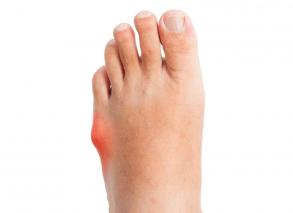 A bunionette describes a bony bump that develops on the side of the little (fifth) toe at the ball of the foot. Bunionettes are very similar to bunions, which are more common and occur at the big toe, apart from their location on the outside of the foot and the involvement of a smaller joint. Bunionettes are also known as tailor’s bunions because of their historical prevalence among tailors who regularly worked sitting cross-legged with the side of the fifth toe against the ground.

What causes a bunionette to develop?

The first of the two main causes of bunionettes is poorly fitting footwear. Shoes that are tight, narrow at the toes, have pointed toes, and are high-heeled are primary culprits in the development of bunionettes. This is because they force the fifth toe inwards on the joint, and keep it there throughout the day. Over time, this will result in changes to the joint itself, with the fifth toe permanently pointing inwards and subsequently the fifth metatarsal (long bone) pointing outwards. This bend creates the bony ‘bump’ that is the bunionette.

Faulty foot biomechanics (the way the foot functions) can also result in bunionettes. This occurs when there is more loading and pressure through the outside of the foot and through the fifth toe. Because you are essentially rolling out through your fifth toe and hence pushing the joint inwards with every step you take, this can also lead to the development of a bunionette over time.

Alongside the changes to the joint, there may also be an outgrowth of bone on the side of the joint where bunionettes are large and/or irregularly shaped.

Bunionettes are usually easy to spot, having a distinct hard bump on the outside of the fifth toe at its joint at the ball of the foot (metatarsophalangeal joint). Like bunions, bunionettes progressively worsen over time, meaning you’ll start off with a small bump that may gradually become larger. This process usually takes years. Other symptoms at the joint include:

Early intervention is key. It is much easier to manage a bunionette that is still relatively flexible and in the early stages as opposed to one that is fixed in place and has been present for decades. These fixed bunionettes usually cannot be conservatively treated, though the symptoms can be managed and reduced.

Your Podiatrist will conduct a thorough examination of your foot and determine if there are any other factors in play aside from the presence of a bunionette. Concurrent conditions such as arthritis, if present in the joint, may alter the best treatment options for your feet. If painful symptoms are present, resting and icing the foot can help offer relief. Depending on the level of severity, tools used to then manage your bunionette may include:

In severe cases, surgery is offered as an option. While some changes from bunionettes can be irreversible, what can be altered is the rate at which it progresses. Your management will look at the best ways to slow down the progression of your bunion and keep you comfortable.