How To Get Rid of Plantar Warts

Home » Bumps and Lesions » How To Get Rid of Plantar Warts 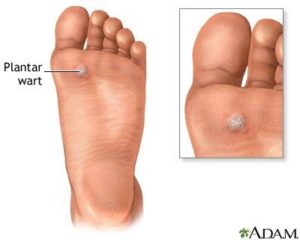 If you or your kids have ever had warts, you’ll know that they’re unpleasant, unsightly and can at times be uncomfortable, especially if they’re on the bottom of your feet. They can quickly spread from one member of the family to another and once you’ve contracted them, they may pop up (literally) at any point in your life. So what exactly are warts and what can you do about them?

Plantar warts are medically known as verrucae and tend to present on the sole of the foot. Warts are actually a virus called the human papillomavirus (HPV). It spreads through a break in the skin, like a small cut or graze, either directly or through sharing the same surface like a shower or a floor.

A plantar wart appears as a small round-ish growth with rough or frayed edges. It remains rough within the wart itself. You may also notice tiny black/brown dots within the wart which are actually small blood vessels which will bleed if the wart is cut. You may notice that the lines of your skin move around the wart as opposed to through it. There may also be hard skin in the form of callus covering a wart. We typically reduce this hard skin in the clinic to both confirm that the lesion is indeed a wart and also for treatment.

Is it really a wart or is it a corn?

Perhaps one of those most difficult elements of treating warts is their similarity in symptomology and appearance to the untrained eye. Even to the trained eye! We’ve seen plenty of patients come in to see us after they had previously been told they had a corn when it was a wart and so their treatment had been unsuccessful.

Corns also present on the sole of the foot and are round in appearance. They are a build-up of hard skin and have a smoother appearance and edges than a wart. Corns tend to elicit pain on direct pressure whereas warts tend to elicit more pain on a sidewards squeeze. Unless you’ve picked at it and caused damage, corns don’t tend to bleed, either.

How do you treat it?

To treat warts, you first need to see your Podiatrist. We don’t recommend at-home treatment because you risk damaging the surrounding skin and putting yourself at risk for a bacterial infection. We often see patients who have tried a stick-on pad over the wart as a means of treatment. Typically these pads contain some form of acid designed to break down area of the wart, eating away at it. The danger here is that the size of acid on the pad is usually much bigger than the size of the wart itself. The acid then works on the healthy skin surrounding the wart and it becomes very painful, red, tender and unpleasant.

At Perform Podiatry we have a wide range of treatment options available depending on what is best suited for you and your wart(s) to see them gone. If you or your family are wanting an effective solution for warts from the foot health experts in Remuera, give us a call on 09 523 2333