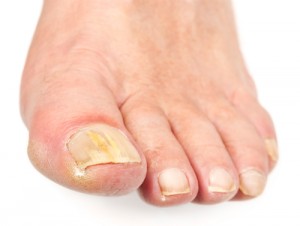 Fungus, or fungi, are microscopic and so are invisible to the human eye – that is until they start infecting the nail and causing symptoms. Fungal nail infections are caused by a group of fungi called dermatophytes. They grow and survive by eating the keratin present in your nails. They also thrive in warm, moist environments and don’t require any sunlight to grow. This makes areas like feet that spend much time inside shoes and socks and walking around on damp surfaces an ideal breeding ground. It is important to note that while fungal spores may be present in an environment, that is not enough to definitely result in an infection.

How are fungal infections spread?

Fungus spreads through spores that move through the air, as well as through direct contact. For an infection to occur, the fungus must come in contact with the nail and an infection must start, without the body’s immune response clearing the infection first. Certain conditions make people more susceptible to infection. These include:

Because fungus thrives in warm, moist, and dark environments, wearing closed in footwear, thick socks, and having sweaty feet creates the ideal environment for fungus to grow. It also means that places such as gyms, saunas, public pools, showers and nail salons also create an environment where the fungus can easily spread from foot to foot.

Don’t worry – we take the risk out of fungal nail infections with our medical pedicures.

What are the symptoms of fungal nail infections?

The symptoms you see are a result of the byproducts of the fungus eating away at the keratin in the nails. The nails can appear:

You may also develop whitish streaks or spots in the nail, and the nail may begin to come away from the nail bed. They may also cause an odour.

How are fungal nail infections treated?

It is important to note that different treatments have shown different rates of success, and that not every treatment may be suitable for each person. For example, due to the risk of adverse effects, oral medications cannot be prescribed to those with impaired liver function. Your Podiatrist will be able to recommend the best treatment option for you and based on the extent of your infection.

Often, treating a fungal infection means not only treating the infected nails but also disinfecting your environment (shoes, socks, showers, surfaces, all other non-infected nails) to reduce the risk of re-infection.