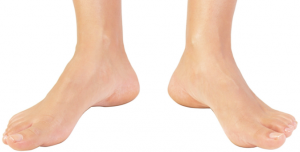 Out-toeing describes the outwardly turned position of the feet that is sometimes referred to as ‘duck feet’. While both in-toeing and out-toeing may occur as a normal part of development in young children, these should resolve by the age of eight. While out-toeing is less common than in-toeing, its implications may be more serious if the out-toeing persists.

There are four main causes for the appearance of out-toeing. These include:

External rotation and contracture of the hip

Femoral retroversion describes the thigh bone (femur) is angled outwards, thereby angling the knees and feet outwards. This is the least common cause of out-toeing of the four and is most often seen in children that are obese. It can also place them at risk of developing other hip conditions as well as arthritis.

Flat feet are typically characterised by a very small or non-existent arch on the inside of the foot. It is usually accompanied by bulging on the inside of the ankle as it rolls in. This can make the forefoot appear turned out. Flat feet are not uncommon in childhood and a majority of children will go on to develop an arch as they grow, resolving the appearance of out-toeing.

While many children can remain asymptomatic until the out-toeing resolves, for others out-toeing may not resolve and they can go on to develop pain in the knees, hips, thighs and feet. If any pain develops, you should consult your health practitioner for an assessment to identify the underlying cause.

How is out-toeing treated?

Treating out-toeing is completely dependant on the underlying cause. At an early stage, out-toeing may just need monitoring to assess progression and the development of any painful symptoms. Where out-toeing is a result of flat feet, orthotics and supportive footwear can be used to correct the foot alignment and hence the appearance of out-turned feet. Any muscular contractures of muscular weakness can be addressed using a stretching and strengthening programme. Where the out-toeing is more severe, does not improve, or is causing painful symptoms, a referral to an orthopaedic surgeon may be required to discuss surgical correction.